My smartphone now fills the role that my PDA used to do. The page remains for a bit of history. 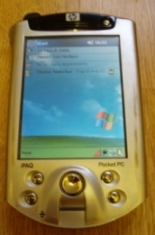 I chose this model as I wanted one running Windows, I wanted wireless built in, I wanted a replaceable battery.

The fingerprint reader is a nice feature, and works really well. Well in all honesty, with one little quirk. If I change the password / security settings I have to scan a finger again, otherwise the first time I come to unlock it, I get prompted for a PIN which isn’t the one that I set and the only way out is to hard reset and reload all the software and settings. I took a couple of tries to confirm this.

I was disappointed with the version of Outlook on Pocket PC 2002 and have since replaced this with WebIS Mail.

The version of Internet Explorer on Pocket PC 2002 is ancient and doesn’t support CSS. I have looked at using NetFront, but didn’t get on with it. 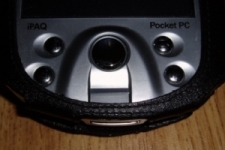 The standard case that it comes with is awful. Firstly the cover opens to the side and is in the way when you are using it, and secondly it is tacky and plastic. The case had to go. I would have liked to have gone for something like a Vaja case, but nice as they are, I already have one mortgage and couldn’t stretch to it.

Instead, I bought a Krussel case. The only problem, which I discovered after getting it, is that the design of case obstructs the use of the fingerprint reader unless you slide the pda up a fraction.

In May 2006, I managed to buy a Vaja case on Ebay and no longer have to slide the pda up to use it.